Tuberous Sclerosis (TS) is a rare genetic disorder that affects 40,000-80,000 people in the United States (total prevalence) that is mainly characterized by development of tumors in different parts of the body. Other well-known disease components include intellectual disability (likely an Autism Spectrum Disorder), ADHD, ash-leaf spots, shagreen patches, and epilepsy. Multiple cases have also been documented of patient developing psychosis secondary to TS. Although TS associated neuropsychiatric disorders have been described, a clear association between tuberous sclerosis and psychosis has not been established. We present a case of a 21-year-old male with a history of TS and Intellectual disability who presented with a chief complaint of suicidal thinking and symptoms of visual and command auditory hallucinations of a demon. His presentation was unique and challenging to manage as the patient lacked executive function, resulting in hyper sexuality and impulsivity. Clinicians should be aware of the association of TS with psychotic symptoms, and the unique challenges in their management.

Tuberous Sclerosis (TS) is a debilitating, rare genetic disease with multisystem involvement due to mutations in the TSC1 gene or the TSC2 gene. The disease can manifest from either a de novo mutation, more likely of the TSC2 gene than the TSC1 gene, or due to familial inheritance, in which the mutation is equally likely in the TSC1 or TSC2 genes [1]. TS has been shown to affect people’s skin [2], with distinctive angiofibromas, shagreen patches, ash-leaf spots, along with renal, cardiovascular, pulmonary, ophthalmic, and CNS manifestations.

CNS manifestations such as Autism and autistic behaviors like hyperactivity, self-injurious behavior, inattention/ADHD, cognitive disability and epilepsy, are common in TS and are collectively called TSC-associated neuropsychiatric disorders [3-6]. Other psychiatric symptoms such as psychosis, including delusions and hallucinations, have been documented in TS patients as well but a clear association of psychosis and TS has not been established.

This case study describes a young adult patient with tuberous sclerosis who presented with both delusions and hallucinations, along with prominent hypersexual and impulsive behaviors which made management challenging. This case adds to the literature another significant example of a patient with TS presenting with psychotic symptoms, and raises the question whether there is a direct association between the two.

Mr. C is a 21-year-old African American male with a past medical history of tuberous sclerosis, schizophrenia, and intellectual disability who initially presented to the ED with hallucinations and suicidal ideation. There was suspicion for possible cannabis, alcohol, and cocaine use. He had been discharged 24 hours previously from another network hospital after a fourday history of similar symptoms. He was sent home on risperidone, which he never filled upon discharge. His tuberous sclerosis reportedly manifested with ophthalmic tumors and growths on his kidney, along with rare absence seizures (Figure 1). 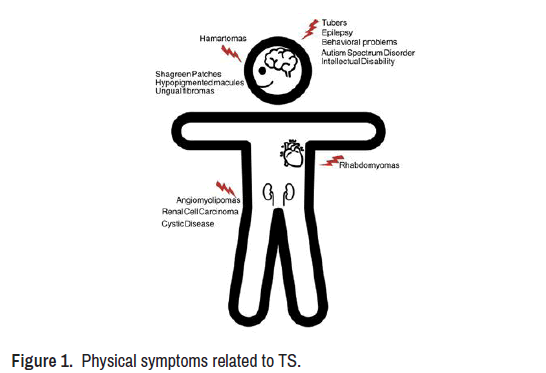 Notes from the ED described him as sexually preoccupied, inappropriate, and aggressive; the patient required IM olanzapine due to his agitation. He was admitted to an inpatient psychiatric floor for his safety and further stabilization. Upon admission, he reported being brought to the hospital because he was snorting cocaine "2 hours ago." He reported that he was given cocaine by someone in his facility. However, despite the admission of use of these substances, his urine drug screen was negative, and he displayed no evidence suggesting respective substance use or withdrawal. Additionally, he endorsed hearing and seeing a male demon figure who intermittently told him to hurt himself and hurt others. He often repeated that the demon wanted to have sexual intercourse with him and was telling him to consume sugar.

Over the course of his admission, multiple trials of antipsychotic treatment were attempted due to the patient’s vulnerability to developing sialorrhea. He was stabilized on haloperidol with adjunctive treatment with valproic acid for disinhibition, and glycopyrrolate to help control his sialorrhea. Mr. C was discharged after 12 days before returning to the ED 3 days after for medication non-compliance, as his guardian/mother did not want him to be on any medications and wanted a full “washout.” He had similar symptom progression during this admission, and he continued the previous regimen before discharge 5 days later with symptom improvement.

He then presented to the ED once more, 13 days after his second stay, due to continued medication noncompliance and similar symptoms. He was once again stabilized with the same regimen. He was discharged after seven days and was educated about the dangers and consequences of medication no adherence.

In the current literature, most cases exploring psychiatric associations with tuberous sclerosis focus on anxiety, depression, obsessive-compulsive disorder, and ADHD. To our knowledge four case studies have previously been published in journals that describe a patient with tuberous sclerosis with psychotic features, making this the fifth.

Due to increasing examples that there may be an association with TS and the development of psychosis, further case controlled or cohort studies are needed to further study a potential association. One experiment was completed by Hunt and Dennis [7] showed that an association between TS and psychosis, but it only involved children and did not determine any causality. Over 50 per cent of the sample showed psychotic behavior, 59 per cent were hyperkinetic, and 13 per cent were severely aggressive [8].

This case study described a young adult patient with TS who presented with prominent hypersexual and impulsive behaviors which made management challenging. Clinicians should be aware of the association of TS with psychotic symptoms and the unique challenges in their management. This case uniquely adds to the literature another significant example of a patient with TS presenting with psychotic symptoms, and raises the question whether there is a direct association between the two. Further case controlled or cohort studies are needed to further study a potential association.

There are no conflicts of interest.