Materials and methods: We determinate the intestinal MUC2, on stool samples of twelve Patient, and healthy control, with Fecal Mucin Assay and analyzed the results with Mann-Whitney U Test Calculator

Results: The results of the dosage of MUC2’concentration in autistic people decrease vs and healthy control groups: this result is statistically significant: the p-value is 00124

Discussion: The result shows a increase of MUC2, perhaps of genetic origin We hypnotize also a probable over expression on highly ipoglicosilated MUC1. All this prevents a regular linkage of the MUC2 to the MUC1, so to form many channels in mucosa The free MUC2 relying on themselves and join together with hydrogen bridge bonds, leaving the highly glycosylated end parts to become the starting point for abnormal growth of the bacteria, which in turn produce opioid such as peptides, that pass into the channels of the mucosa layer.

Previous studies have focused, for the aetiology of autism (ASD), on genetic causes, immune system abnormality, inflammation, exposure to environmental toxins and alterations in the microbiota of the intestine [1]. The percentage of genetic heredity of ASD is about 50% among Swedish children, suggesting that not only genetic factors play an important role to develop the ASD, but also environmental factors [2,3]. Many experimental evidence shows that gastrointestinal symptoms, such as abdominal pain, gastric cancer, diarrhoea, constipation and flatulence, are common in patients with ASD [4]. A recent study [5] identified constipation as the most common symptom (85%) in children with ASD according to parental reports and assessments by pediatric gastroenterologists. The percentage of gastrointestinal symptoms varies from 23 to 70% in children with ASD [4]. In addition, gastrointestinal symptoms show a relationship with ASD severity [4,6]. Although these studies have not shown a cause-effect relationship between gastrointestinal symptoms and ASD, the results suggest that the intestine plays an important role in the etiology of ASD. Recent studies [7,8], have shown that changes in microbiomes can leave one or more microbial "fingerprints", (Metabolomics), in their biologic activities. Metabolites thus become chemical compounds that can characterize people with autism and can serve as markers for diagnostic purposes. More recent studies show the important role of the intestinal barrier and its permeability, in the formation of many neurological diseases, because the alteration Macrobiota's alteration is probably the consequence of the variation of intestinal permeability. Gastrointestinal symptoms are a common co morbidity in patients with autism spectrum disorder (ASD), but the underlying mechanisms are unknown It is anyway important to note however that the latest research has shown that autism is also linked to a possible abnormal excitation related to compounds derived from metabolic cycles involved in neuronal transmissions. Recent hypotheses suggest that some phenomena may occur as a result of an altered intestinal permeability, with a consequent incorrect metabolism of some foods. This metabolic process involves the of bioactive peptides’s formation in the gastrointestinal tract. Recent studies [9], have confirmed, such as, that casein forms a compound, beta casomorphin-7, which is an opioid like peptide. Some studies show that the production of these opioids like peptides is experimentally associated with autism these peptides pass through the brain barrier to bind receptors and prevent their smooth function. Our hypothesis is that the main aspect of this phenomenon may result from an alteration of intestinal permeability due to an imbalance of the intra and extra cellular mucin layer. The purpose of this study is to show the possible imbalance of the two mucins amount and with literature data make a reasonable hypothesis for its relationship with the opioids like peptides realise.

This study followed a procedure were in accordance with the ethical standards of the responsible committee on human experimentation and with the Helsinki Declaration of 1975, as revised in 2000, The independent Ethics Committee of Roma Biomed Research LAB Milan, Italy, obtained informed assent for children aged over 7 years participating in the research. To determinate of the intestinal MUC2’s concentration we performed, on stool samples of twelve ASD children, and healthy control, both with age between 8 and 15 years. We used Fecal Mucin Assay Kit, to extract and fluorometrically find the amount of mucin content in feces. Faecal mucin amount can be a measures index of intestinal barrier function.

Step 1: Extraction and partial purification of mucin from faeces. • The remaining undiluted Calibrator should be stored at 2°C-10°C .

• Diluted Calibrator is stable and should be stored at 2°C-10°C for 1 month.

We statistically analyzed the results with Mann Whitney U Calcul ator

The results of the dosage of MUC 2 in ASD and healthy control (Table 1), show that the amount of MUC 2 is lower in ASD vs healthy control group and the difference is statistically significant the p-value is 00124.

Our study suggested two different but complementary approaches to the problem. The first is an analysis of the metabolomic data present in the literature, which can actually prove the changes in the intestinal macrobiota to formulate a hypothesis of the relationship between autism and alterations of the defective intestinal layer. The second step is to decide the concentration of intestinal MUC 2, because in all major intestinal diseases, including irritable bowel, there is a change in intestinal permeability. This has always shown a decrease in mucus fractions in the layer structure. Research study [9] has shown that under these conditions bacterial enzymes can directly produce metabolites such as D-lactic acid and ammonia, and can exert neurotoxicity with hormones and neurotransmitters identical to human hormones [10]. Metabolomic studies [11], also show that most of the discriminating metabolites in ASD, in a possible relationship, with altered intestinal permeability, belong to the metabolic pathways of tryptophan and purine. In addition, vitamin B6, riboflavin, biosynthesis tyrosine-tyrosinetryptophan, pantothenate and CoA, pyrimidine metabolism, dimethylamine, hippuric acid and phenylacethylglutamine, differ much in autism compared to control [12]. There is also a decrease in plasma levels of p-hydroxyphenyl acetate, a metabolite associated with bifidobacteria and lactobacilli known to serve as an antioxidant both in circulation and in tissues [13]. This study also shows that the production of opioid peptides, such as casomorphine-7, or gliadinomorphine, is experimentally associated with autism [14], these peptides pass through the brain barrier and binds to receptors and inhibit reuptake of the normal neuronal transmitter. All these results, according to our hypothesis, show a possible relationship with a modification of the intestinal microbe, depending on the change in the intestinal mucosa layer. A recent study [15], shows that, as strains of particular bacteria normally present in the microbe, the intestine can proliferate abnormally, having as substrate the glycosylated spine, mucins, the main constituents of the protective layer. The loss of the barrier provides a gateway for bacterial spread, together with the increased potential for systemic transmission of antigens, virulence factors, other pathogens and bacterial metabolites [13]. These factors can therefore influence brain functions and group vs. inflammatory processes This process can obviously occur when, for reasons not yet clear, these glycosylated proteins mainly transmembrane mucins increase in concentration, or the mucins that form the MUC2 gel, do not sufficiently protect the epithelial mucosa and expose the terminal glycoside residue of the latter, to the enzymatic action of the bacteria. We think that the latter hypothesis is very likely in autism The experimental results of this study (Table 1), show as the MUC2’s concentration in autistic people increases vs and healthy control groups: This result is statistically significant: the p-value is 00124 and can very well prove the hypothesis of a lack of defense of the intestinal epithelial mucosa. We hypnotized that this abnormality is the consequence of a MUC2 mucin (gel formation), over expression and, as in many inflammatory process bowl many bowl inflammatory process, there is a simultaneous decrease of MUC1 transmembrane mucins. This effectively prevents MUC2 from attaching MUC1 to low glycosylate MUC1, so that the former recline on themselves and join in ninth place with hydrogen bridge bonds The result is the formation of an incorrect protective layer with channels and exposure of the highly glycosylated MUC2 to bacterial attack This fact prone to an increase in intestinal bacterial flora with the growth of commensal strains that then go to degrade in an incomplete way proteins such as casein or gluten. From a rheological point of view, the imbalance between the transmembrane mucin fractions and the gelatinous mucins that form the mucins external to the intestinal epithelial cells, modifies the spinnbarkeit value that measures the adhesion of the mucin and modifies its normal continuous layer, in a succession of bubbles, separated by channels The final result is the that the intestinal mucosa layer’s, alteration, with a macrobiota that forms opioids like peptides These can finally enter the gutbrain axis, through the channels formed in the intestinal mucosa, We can represent the consequence of this phenomenon as we can see in Figure 2. 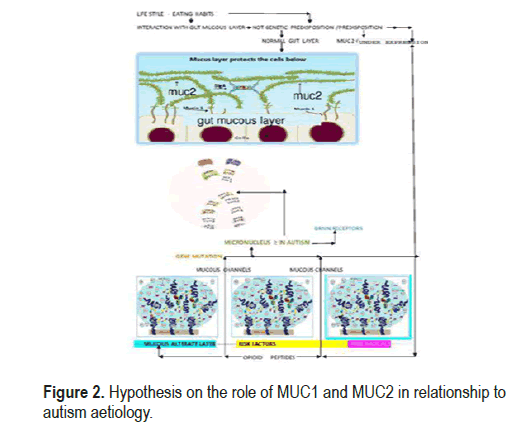 Figure 2. Hypothesis on the role of MUC1 and MUC2 in relationship to autism aetiology.

The intestinal microbiome is a part of human physiology; and changes in the gut microbiota can modulate gastrointestinal physiology, immune function, and even behaviour. Links between specific bacteria from the indigenous gut microbiota and phenotypes relevant to ASD raise the important question of whether microbial dysbiosis plays a role in the development or presentation of ASD symptoms. The genes of this Human Macrobiotic complex are capable to produce opioid like peptides by certain foods that in presence of an abnormal intestinal mucosal layer play an important role in autism disorders. The use of enzymatic products such as plant-based proteases can begin to break down wheat milk proteins while they are still in the stomach. This further boost to protein breakdown leads to deeper digestion of proteins, specifically targeting the peptide bonds present in dietary opiates.